Founder and Artistic Director of Bedford Dance Center, Karen has extensive training in ballet, jazz, and modern. She received numerous scholarships and has studied under some of the country’s most prestigious teachers such as Judith Jameson; Milton Myers, Lynn Simonson and Charles Wright at Jacob’s Pillow; with E. Virginia Williams and Sydney Leonard of Boston School of Ballet; Suzanne Taylor, former artistic director of New Hampshire School of Ballet; Gus Giordano of Chicago-based Giordano Dance Company; and Joyce King, the Artistic Director for the Joyce King Dance Company in New York City.

Karen was a principal dancer with the NH Ballet Ensemble and has performed in various shows throughout the country including the touring of NFL Industrial, guest dancer at the St. Paul’s Nutcracker, First Night in Concord, Dance Fest NH, and Jacob’s Pillow where she was selected to perform works from “Revelations” as well as selections from the Hubbard Street Repertory.

Her choreographic credits include, “Fiddler on the Roof”, “Peter Pan”, “The Drowsy Chaperone”, and “Pippin” for Derryfield School; “Birdland” for St. Paul’s Ballet Company; Miss NH Pageants; Dean Kamen’s NH First; local productions of “Bye Bye Birdie,” “Oklahoma,” and “Wizard of Oz,” as well as a collaboration with Joyce King of NYC on the premiere performance of a “Moment of Silence” a Tribute to 9/11, which received high accolades. She has staged dozens of ballets including “Coppelia”, “Sleeping Beauty”, “Cinderella” and “The Nutcracker Suite” to name a few. She has taught Master classes throughout New England including St. Paul’s in Concord, NH.

Karen provides her students the opportunity to work and study with various choreographers and guest teachers throughout the year as well as at the Summer Dance Intensive Workshop. She strives to instill her love of dance by inspiring her students to explore their own creative expression and artistic development.  Her students have gone on to perform professionally with various professional dance companies, in off Broadway and Broadway productions, graduated with B.F.A’s in dance, become dance teachers, choreographers and studio owners.  Karen is thrilled by their accomplishments and is so proud to now teach her former student’s children! It has always been her mission to not only teach the art of dance, but to guide, support and create amazing human beings!

She is married to Dan and is the proud mother of 2 boys, Jordan and Riley, and her dog, Gracie! 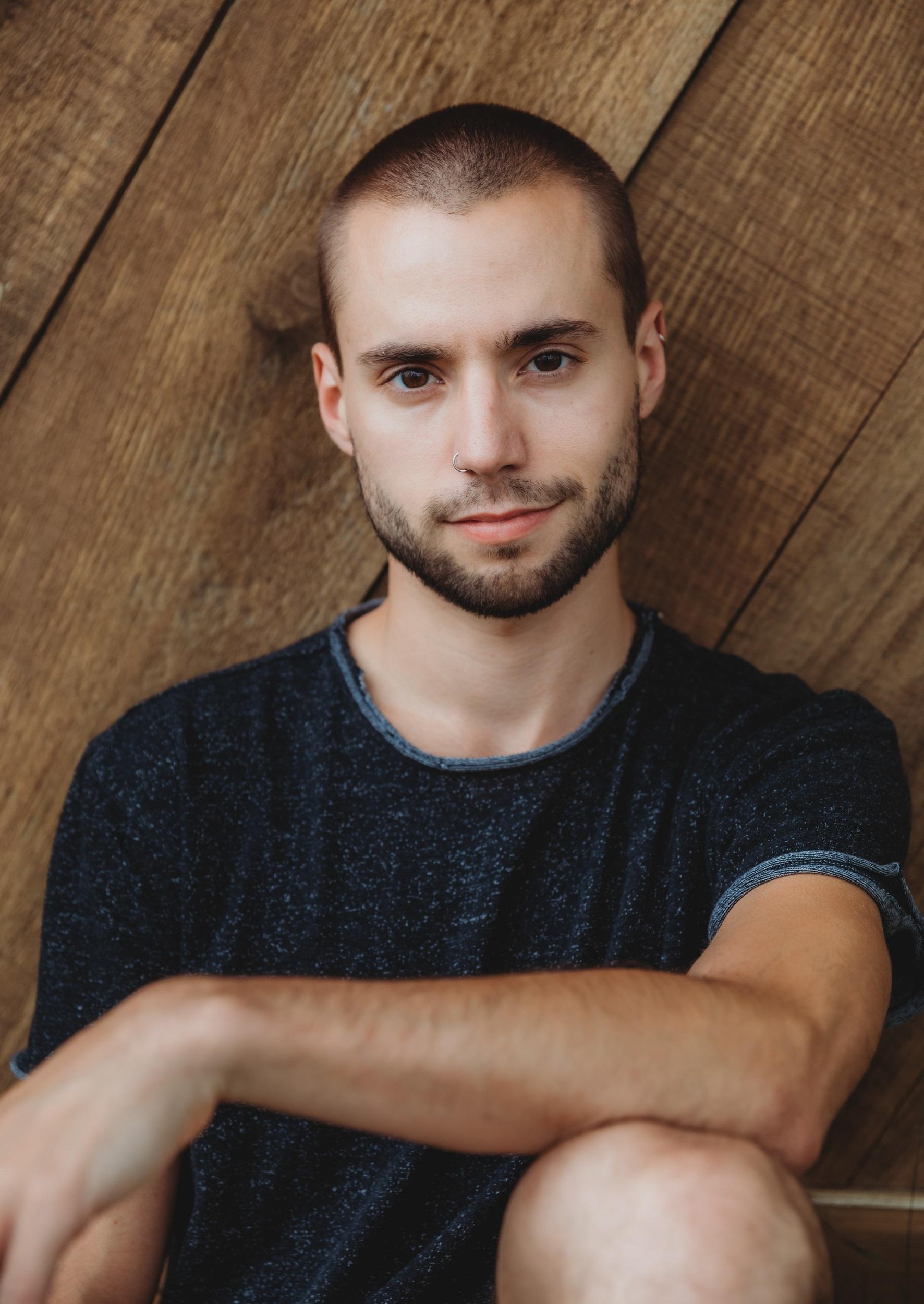 Zackery received his Bachelor of Fine Arts in Dance from Marymount Manhattan College with a concentration in Jazz. Co-Artistic Director for NSquared Dance, a New Hampshire based contemporary dance company. NSquared Dance was founded in New York City in 2014 & Zackery has toured to Seattle, Detroit, Philadelphia, Pittsburgh & Baltimore. He has set various works of choreography on the company as well as taught in various cities with NSquared. He has produced three split-bill performances in New York City and two solo tours to Portland, Maine. As a member of NSquared Dance, Zackery enjoys working side by side with his husband and being able to share many stages and performances with him!

Zackery is also a seasoned dancer with Keigwin & Company, a prestigious New York City modern dance company.  Keigwin & Co. has given Zackery many performing & teaching opportunities throughout the United States and Abroad. He was fortunate enough to embark on a month-long
exchange tour to Africa thanks to The US State Department and Brooklyn Academy of Music. He has performed on stages such as the Joyce Theater, Symphony Space, and New York City Center.

Maria is a California transplant who has lived in Nashua for 15 years. She trained and danced professionally with San Jose Dance Theatre. She has taught classical ballet and point for over 20 years. By way of her husband’s military career, she has had the good fortune of living in various locales — all offering wonderful opportunities for professional growth. She has trained under master teachers David Howard, Finish Jhung, Eleanor D’Antuono and Densil Adams, and is a Dance Masters of America certified instructor. Besides her husband, Michael, Maria has a daughter, Lauren and a son, Colin.

Ashley Carrier graduated with her Bachelor of Arts in dance from DeSales University. She studied under exceptionally talented artists/teachers such as Trinette Singleton of Joffrey ballet, David Parsons and his company members, Sean Curran, and Eddie Taketa from the Doug Varone Company. While in college Ashley danced for a start-up modern dance company called Vada Dance Collective. She is currently a dancer in Ballet Misha; a non-profit dance company. Ashley is married to Shawn, has three wonderful step-sons, Kyle, Brandan, and Brian, and a beautiful daughter named Emma.

Amanda is a former student teacher and BDC alumni of 2003. As a young dancer, Amanda spent her summers attending Burklyn Ballet Theatre where she studied under master teacher’s such as David Howard and Angela Whitehill. She received her Bachelor of Fine Arts from the Hartt School at the University of Hartford. Amanda was a company member with Full Force Dance Theater, as well as Bowan McCauley Dance Theater, a contemporary dance company in Washington, D.C.

Melissa Teixeira began performing at an early age in theater, music and later dance. Professionally, Melissa studied primarily at the Dean College School of Dance, where she received her Baccalaureate Degree in Dance with a minor in business.

Post-graduation, Melissa spent 2 years performing in the Boston area with various dance companies, while starting her own company, Perceptions Dance. In 2009, Melissa moved to New York City to develop the company, which transformed from just a performance company to performance, education and presenting. The company has toured across the country, from Cape Cod, MA to San Francisco, CA, on such prestigious stages as the Joyce SoHo, Ailey Citigroup Theater, Dumbo Dance Festival, CoolNY, White Wave Festival, Boston University, the Davies Symphony Hall and many more. In 2011, the company was selected to perform at the prestigious 8th annual Fashion on the Square in San Francisco – a benefit for the San Francisco Arts Commission.

In 2010, Melissa founded the Perceptions Dance Festival in NYC, which is dedicated to creating high-quality performance opportunities for emerging and small dance companies and independent choreographers. The Festival has presented more than 40 national and international artists over 4 shows since 2010, providing artists with not only a stage and visibility, but career-boosting materials such as high resolution photos and video documentary.

In addition to dance, Melissa trained extensively in the Anya Method directly with the founder, Courtney Bauer. She spent several years teaching Anya signature group fitness classes, and private/semi-private Pilates equipment classes. Melissa also worked directly with Studio Anya as a consultant/contractor and Director to develop the business, and helped to launch their online programming called The Sagebook, a method for students and trainees to study and practice the dense curriculum.

Melissa has taught dance across the northeast to children, adults and professionals as a resident instructor, guest artist, and master trainer. Currently, Melissa is pursuing a Masters of Science degree in Arts Administration from Drexel University.